Oklahoma (South)
Michael Brown has been a successful businessman in the Lawton and Oklahoma City areas for the last 30 years.  He is a vocal advocate for the military and has deep roots at Fort Sill, having been inducted into the Honorable Order of St. Barbara.  He has served in a multitude of leadership roles including chairing the Lawton Fort Sill Chamber of Commerce, serving as President of the United States Army Association (AUSA) and being elected two terms to the City Council where he was selected to serve as Mayor Pro Tempore for two years.  Michael attended Oklahoma State University on A Presidential Leadership Scholarship Program, Graduating in 1984 with A Bachelor of Science Degree in Journalism.  Michael backfills the position left vacant by Bill Burgess, who passed away in February 2019. 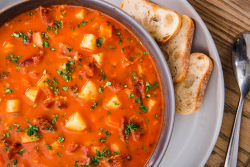 In a large pot over medium heat, cook bacon. Remove from pan and drain on a paper towel lined plate. To the same pot, add onion, celery, and carrot. Cook until soft, 5 minutes, then add garlic and cook until fragrant, 1 minute more.

Garnish with parsley to serve.

Lawton Proud is dedicated to spreading the word about the good things happening in Lawton! 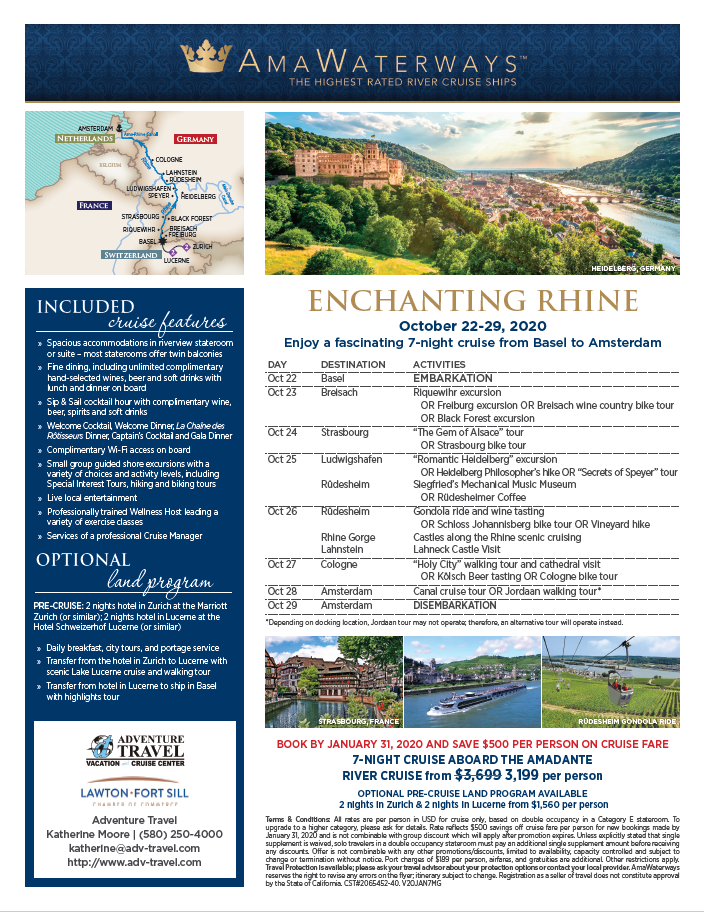 1. In a large pot over medium heat, heat oil. Add onions, celery, and carrots and cook until softened, 6 minutes. Add garlic and thyme and cook until fragrant, 1 minute more.

2. Move vegetables to one side of the pot and add chicken. Season with salt and pepper and cook until no pink remains, 6 to 8 minutes. Add stock and 1/2 cup of water and bring to a boil.

3. Add noodles and cook according to package instructions. Season to taste with salt and pepper. Add parsley and serve immediately. 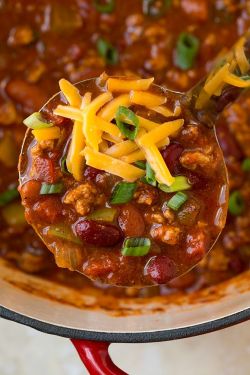 Saute the veggies and brown some ground turkey.

Then you add in some canned diced tomatoes, tomato sauce, broth and spices.

Now let it simmer for 20 minutes, which will really brighten up those flavors and allow them to blend together as well.

Stir in the kidney beans. And you’ve got yourself a delicious, simple, healthy chili that everyone will enjoy! 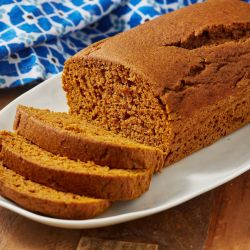 3. Transfer batter to prepared pan and smooth into an even layer. Bake until a toothpick inserted into the center of the loaf comes out clean, about 50 minutes to 1 hour. 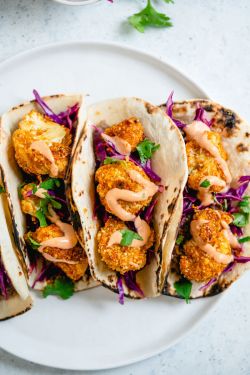 Make the Crispy Breaded Cauliflower (about 40 minutes total; use the remaining time to complete the steps below.)

If using purchased refried beans, taste and if needed, mix with 1/2 teaspoon cumin and/or a pinch or two kosher salt. (Or, you can make our Supremely Simple Refried Black Beans but for this recipe we preferred using storebought so we could focus on the cauliflower!)

Thinly slice the cabbage, enough for 2 cups. Mix it with 2 tablespoons lime juice and a pinch or two of salt. Allow it to stand at room temperature until serving.

Warm the tortillas, or char them by placing them on grates above an open gas flame on medium heat for a few seconds per side, flipping with tongs, until they are slightly blackened and warm.

Chop the cilantro for a garnish.

To serve, place refried beans in a tortilla, top with cabbage, breaded cauliflower, Yum Yum sauce, and cilantro. Serve with lime wedges to spritz prior to serving. (If you have leftover cauliflower, you can reheat them in a 350F oven for 10 minutes, flipping once.)

Provided By A Couple Cooks

A continuation of our State Chamber DC fly-in, and the notes Senator Montgomery and I took for this
incredibly impactful trip. I simply cannot say enough about the professionalism and quality of the visit.
The State Chamber did an amazing job of planning the trip and arming us with great information and
impactful lectures. As you know, Energy plays a large role in the global, national and state economies.
Oklahoma has particularly strong ties to energy, with one-quarter of all jobs in Oklahoma tied to the
energy industry. Federal regulations aimed at the energy sector can have a profound impact on the
future growth and development of Oklahoma’s economy. Nationally, in 1970 under the Nixon
administration, the Clean Air Act (CAA) authorized the Environmental Protection Agency (EPA) to
regulate hazardous air emissions resulting from energy production.

In 2015, the Obama Administration
announced the Clean Power Plan (CPP) to further lower carbon levels by setting limits on carbon
pollution produced by U.S. Power plants. In 2019, the Trump Administration repealed and replaced the
CPP with the Affordable Clean Energy (ACE) Rule, which provides emission guidelines for states to use
when developing plans to limit carbon pollution. Oklahoma is the nation's 6th largest crude oil
production state. Oklahoma has five operable petroleum refineries that together process almost 3
percent of the total U.S. capacity. Oklahoma is the 4 the largest natural gas-producing state in the nation,
accounting for 8.6 percent of marketed production. Oklahoma ranks second in the nation after Texas in
net electricity generated for wind.

Part of the Chamber Fly-In featured a working lunch with EPA Administrator, Andrew Wheeler. The
presentation featured a significant volume of valuable information. The administrator made note of the
EPA’s history, pointing out that next year makes 50 years of existence. Perhaps one of the most
astounding facts were the substantial numbers of employees who still presently work for the EPA who
started when the agency was founded. Administrator Wheeler emphasized that he hoped they would
stay on for another year to be part of celebrating the agency’s anniversary and long the course of their
public service had been.

Getting to the role of the EPA, Administrator Wheeler highlighted the success of the agency in many of
its original goals, arguing that we can be proud of some of the cleanest air to be had since the 1970s. Of
course, the agency's mission continues. Among the issues the agency seeks to tackle relates to Corporate
Average Fuel Economy Standards (CAFÉ standards). A handful of states have taken it upon themselves to
attempt to regulate standards around vehicle emissions, creating the potential for a patchwork of
regulation that manufacturers cannot keep up with to provide affordable, fuel-efficient cars. Wheeler
pointed to their work on new regulations dubbed Safer, Affordable, Fuel-Efficient (SAFE) Vehicle Rules to
meet those objectives.

The EPA is also tackling the Waters of the US (WOTUS) rules, infamous for their potential impact on the
agricultural community. While elements of that discussion were geared toward better suiting farmers,
the attention of Mr. Wheeler now falls on PFAS as it relates to safe, clean water. Per- and polyfluoroalkyl
substances (PFAS) are a group of man-made chemicals that number into the thousands, and which
have garnered the attention of the EPA for their impact on the water ecosystem.

One of the PFAS
Administrator Wheeler emphasized was a type of firefighting foam and its impact on the environment.
A final note from the discussion which expanded beyond even these topics was the concern for the
EPA’s future workforce. The EPA has the seconded highest immediate retirement eligibility rate among
federal agencies at 21.6%: in the next five years, that number is number three at 42.2%. Please contact
the chamber and we will be happy to refer you to experts in the field if you have additional questions.

As stated, we are simply sharing notes and information we received, as we believe in informing our
members on topics we believe are relevant. You can also visit our website at
www.lawtonfortsillchamber.com For more information on these topics you can go to
www.okresearchfoundation.org 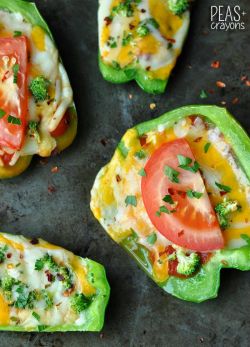 a pinch of red pepper flakes

a pinch of basil or parsley

as many toppings as you can fit!

Pre-heat your oven or toaster oven to 350 degrees Fahrenheit.

Slice off each of the four sides of your pepper and lay flat on a baking sheet.

Top with sauce, then cheese, followed by any and every veggie in your crisper! I added broccoli and tomatoes to mine.

Bake for 10 minutes, flipping your oven to broil towards the end to make the cheese nice and bubbly.